When someone is arrested, one of the first things they worry about is how much their bail will cost. The amount of money required to post bail varies by state, and in Indiana it’s typically set at 10% of the total bond amount. So, if you’re arrested and charged with a felony that has a $10,000 bond, you would need to pay $1,000 to be released from jail while your trial is pending.

Continue below to explore this topic in further detail.

The type of crime that the defendant is accused of also affects the cost of a bail bond. For example, if the defendant has been charged with murder, they may be subject to higher bail amounts than someone facing a minor charge such as shoplifting or disorderly conduct. Furthermore, a judge can impose additional restrictions that could increase the amount of money that needs to be paid for a bond.

The bail agency you choose will also affect the cost of your bond. There are many different agencies throughout Indiana, each with a different fee structure. Some charge an upfront fee while others may offer discounts or payment plans. Bail bond companies typically charge a fee of 10%, but as high as 15% of the total bail amount. This fee can be expensive, but it may be worth it if it means that you can get out of jail quickly. It’s important to do your research and compare prices before choosing an agency to work with.

Additionally, the amount of collateral needed to secure a bond will also influence the cost of your bail bond. Collateral is an item of value that guarantees the defendant’s appearance in court and can include items such as property, vehicles, or cash. The more valuable the collateral, the lower the cost of your bond.

Ultimately, the cost of a bail bond in Indiana is determined by many different factors. It’s important to do your research and compare prices before making a decision. Additionally, it’s important to understand all the potential costs associated with a bond before signing any paperwork or paying any money. Doing so can help ensure that you get the best deal possible and that you’re not taking on any unnecessary risks.

If you are unable to post bail, you may ask the court for a bail reduction hearing. The court will consider your ability to pay bail and whether you are a flight risk before making a decision. If the court agrees to reduce your bail, you will be released from custody pending your trial.

If you are unable to post bail and do not want to wait for a bail reduction hearing, you may want to consider getting help from a Noblesville bail bond company. Contact Uptown Bail Bonds at 317-919-2489 for the fastest and most affordable bail bonds in Hamilton County, Indiana. We also provide prearranged bail for arrest warrant surrenders.

It is common knowledge that a felony arrest is a bit more serious than a misdemeanor arrest. Those arrested on a felony charge are tried and sentenced on a federal level rather than a state level, so the resulting legal penalties and social consequences are generally harsher than that of a misdemeanor conviction. Although felony arrests are serious, most defendants are still granted bail privileges. Using a bail bond provided by a local and licensed bail bond agency is one of the fastest and most secure methods of obtaining a release from jail after a felony arrest.

Continue reading to learn what you can expect from felony bail bond services, including the average cost of a felony charge bail bond and the usual terms and conditions it comes with.

What You Need to Know About Bail Bond Prices

When it comes to the average cost of a felony bail bond, there is good news and bad news. The good news is that bail bond prices are regulated by the state, more specifically the Department of Insurance. This means you can count on bail bond prices being as economical as possible, and therefore reasonable for most consumers. State regulation on bail bonds prevents shady or unethical bail bond companies from overcharging clients based on their own personal beliefs or prejudice, or price gouging those who appear wealthier than other clients.

Now for the bad news. Although bail bond prices are regulated by the state, there is still a range of discretion for bail bond agents. Right now, Indiana bail bond companies are permitted to charge anywhere from 10% to 15% of a person’s bail bond premium.

When it comes to paying for bail bond for a felony arrest. Defendant, you can expect the price to be just a bit more than someone who was arrested on a misdemeanor charge. That is because the bail bond agency is taking on more liability. In most cases, felony bail bond prices are still very fair and on the lower end for first time or non-habitual offenders.

For felony defendants who have been arrested for felony charges or convicted of felonies in the past, they can expect their bail bond price to be higher. For those who have fled the court system before, they may be given the highest bail bond price or denied bail bond service altogether.

Are you looking for a qualified Noblesville IN bail bond company to get your loved one out of jail after being arrested on felony charges? Contact Uptown Bail Bonds at 317-919-2489 for the fastest and most affordable bail bonds in Hamilton County, Indiana. We operate 24 hours a day and 7 days a week, so there is always an Indianapolis bail agency and invited to your call!

FAQS About Bail Bond Prices
Do I Get MY Money Back for a Bail Bond?
Can I Get Bonded Out of Jail if I Have Bad Credit? 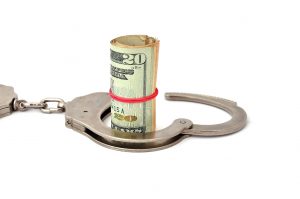 There are so many questions that run through a person’s head when they get the news that a friend or loved one has just been arrested. And rightfully so; learning of a loved one’s arrest is alarming enough, but undertaking the responsibility of posting their bond is another level of stress. Fortunately, you can get anyone out of jail with the help of a local bail bondsman, so long as their charge is not murder. A bail bondsman will ask you for some pertinent information regarding your loved one’s situation.

So before calling a bail bond agency, have this information ready to go if you can:

If you know the first and last name of the person who was arrested, as well as the county they were arrested in, the bail bondsman can secure the county jail and booking number for you. However, having this information ready for the bail agent makes the process a little more efficient.

Aside from having questions about obtaining a bail bond and release from jail, almost everyone has questions about bail bond prices. And you can never be too informed when it comes to money. Continue below for some of the most frequently asked questions regarding this topic, and perhaps get some answers for yourself before contacting the bail bond company.

Can a Bail Bondsman Offer a Discount on the Bail Bond Premium?

No matter what you’ve heard about bail bond discounts, they simply do not exist. If prices among bail bondsmen differ, it is because individual agencies are choosing a different state-regulated minimum and maximum for bail bonds. See below.

Is One Bail Bondsman Cheaper Than Another?

There are cheaper bail bonds in some counties as compared to others. It all depends on what the Department of Insurance allows, and whatever a bondsman chooses to sell their services for. The general state minimum and maximum is 10 to 15%, but some are as low as 8%. Talk to your trusted bail bondsman for the current state minimum for bail bonds.

Acceptable collateral for bail bonds vary among bail bondsmen. It is usually a personal preference as to what they will and will not accept, and also personal discretion as to who they choose to accept it from. Examples of collateral commonly accepted in the bail bonds industry include real estate, cars, credit cards, stocks, bonds, bank accounts, jewelry, and personal credit.

Call Uptown Bail Bonds at 317-919-2489 for Hamilton County bail bonds you can trust. We offer 24 hour bail bond services in Noblesville and its surrounding neighborhoods. Contact us anytime to request free estimates and jail information, or to perform an inmate search. Our Noblesville bail bondsmen are eager to get you out of jail in Hamilton County, Indiana.

The number one question all bail bondsmen get from phone calls and clients has to do with paying for bail bonds. So many people want to know if they’ll receive their money back after a trial or case has closed, or when a defendant completes probation. The quick answer is that bail bonds are not refundable, ever. Just like buying a share of stock, you cannot ask or get your money back once you have agreed to the transaction. Continue reading to learn more about why bail bonds cannot be refunded, and who you can trust for accurate and honest answers to all your bail bond questions.

Although a popular circulating question, lawyers, police officers, and jail staff might not have the appropriate answer for you. It is always best to consult a licensed bail bondsman directly for accurate and updated answers to questions about bail. No matter what ends up happening in court, a defendant cannot get a refund for bail bond services. And all bail bond agencies will inform clients upfront that there are no refunds for their services.

The reason bail bonds are not refundable has to do with liability. A bail bond company is assuming all responsibility for a client, in terms of bond amount and initial court appearances. If a person fails to appear for their initial scheduled court date following their arrest, the bail bond company that provided their services will have to forfeit all of the money they “put up” for the defendant’s release from jail.

So if a person’s bond is set at $10,000, they can either pay that money in-whole to the jail to be released, OR, they can purchase a bail bond for 10-15% of that amount (Ten to fifteen percent is the standard Indiana rate for bail bonds). That 10 to 15% is non-refundable because if the defendant misses or skips their court hearing, the bail bond company does not get back the $10,000 THEY paid to have their client released from jail.

Call Uptown Bail Bonds at 317-919-2489 for prompt and professional 24 hour bail bond services in Noblesville, Indiana. We are licensed, bonded, and insured bail bondsmen with decades of experience in the indemnity industry. We offer a wide variety of bail bonds, as well as, notary services, jail pickup and drop off, inmate searches, and more! Call 317-919-2489 to get out of jail in Hamilton County, IN today.